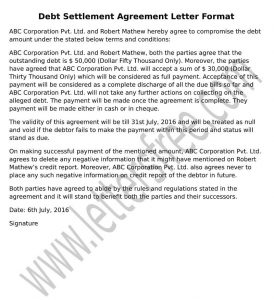 The purpose of writing a formal agreement letter for debt settlement is to have a written confirmation of what has been discussed verbally with your creditor for settling the debt. This is an important document and must be drafted with precision. Given below is a format example which you can use for creating a personalized letter.

ABC Corporation Pvt. Ltd. and Robert Mathew hereby agree to compromise the debt amount under the stated below terms and conditions:

The validity of this agreement will be till 31st July, 2016 and will be treated as null and void if the debtor fails to make the payment within this period and status will stand as due.

Both parties have agreed to abide by the rules and regulations stated in the agreement and it will stand to benefit both the parties and their successors.

Given Below are a Few Agreement Letter Samples for a Clearer Ideas:-

Agreement Letter for House Rent Format
Agreement letter for house rent is a format letter which mentions the formal relation between the landlord and the tenant.

Sample Agreement Letter for Car Accident
We are living in a world where there are over millions of vehicles running on roads and accident occurs every now and then.